(Editor’s note) It was the Victoria Barracks player who in the 1850s, originally developed what became the SCG; they also claim that their soldier spectators who came from the Barracks and supported them are the originators of the term “to barrack” as used in Australia. (This is disputed by etymologists who ascribe the term either to Melbourne or Ireland)

C.C.N.S.W. was invited by Cricket NSW to represent the civilian population of NSW v the Army at the SCG to commemorate the 150th anniversary of the foundation of the SCG. Arising from that game C.C.N.S.W. and the Army jointly bought “The Barrackers’ Cup” which is kept in the Army Museum at Victoria Barracks and occasionally at the request of the C.C.N.S.W. Match Manager brought out on the day.

The ball with which C.C.N.S.W. bowled in the150th anniversary game can be seen in the SCG Museum.

To quote from the Army web site

“Victoria Barracks is one of the best-known examples of military architecture in Australia. The Regency-style Victoria Barracks were designed by Lieutenant-Colonel George Barney, who also built Fort Denison and reconstructed Circular Quay. Most of barracks was constructed using locally quarried sandstone between 1841 and 1849. The barracks were occupied by British troops up until 1870 and then taken over by the New South Wales colonial forces. After the Federation in 1901, Victoria Barracks housed the various headquarters responsible for administering and co-ordinating the military. Between 1931 and 1936 the barracks was home to the Royal Military College of Australia and from July 1938 to July 1940 it also housed the Command and Staff School. Today, Victoria Barracks is home to the Headquarters of Forces Command.
The Barracks are widely considered to be one of the best examples of a military barracks in the world”.

This fixture was washed out in the 2015-16 season, despite 3 attempts, and our first attempt this year had also been washed out. So it was with some relief that I learned on the morning of the game that, despite a little overnight rain, the pitch was good for play.

A number of C.C.N.S.W. members took advantage of the offer of a tour of the Barracks museum. Reports were that this was very enjoyable, with the museum curator so talkative that the tour was only up to the early 1900s by the allotted finishing time. For any members who would like to do the museum tour, it is available every Thursday at the Barracks, and I am told that another tour for C.C.N.S.W. members will be organised when we play the return fixture at the Barracks in March.

Up on the parade field, the Barrackers’ Cup had been found and was overseeing the proceedings. A 30 over match was agreed. The Army won the toss and put us in to bat on a green wicket with a few cracks. Tom Robertson opened up and played a typical innings – short and sweet – until he was out for 25 at the end of the second over. Opening partner Ross Dalgleish (8) played one pretty cut shot before he and Ian Neil (0) fell in quick succession. That brought Mitch Sturt to the wicket, who proved the backbone of our innings. After Alton van Straalen (14) fell, Mitch and guest player and rocker Josh Shipton (12) steadied the innings with a 55 run partnership. Unfortunately after Mitch fell we lost some quick wickets and, notwithstanding a few good hits to leg by Pat Hogan (13), were all out in the twenty ninth over for 132. Probably 20 short of a par score.

The Army presented with two decent opening batsmen, and lost their first wicket at 40 in the ninth over. At that point the Army were ahead on points. However, the introduction of Mitch Sturt from one end, and Al Yap from the other, saw the runs slow and some wickets fall. Mitch had 1 for 2 from his first 3 over spell, while Al bowled 5 overs on the trot for 3 for 12. At drinks after eighteen overs the Army was 5 for 59 and we were in front for the first time in day. Wickets continued to fall at regular intervals. Some late hitting from the Army’s no. 9 and 10 batsmen got them to within 22 runs with two overs to bowl. But fittingly our MoM Mitch Sturt took the final wicket to finish with 4 for 6 and a great all round performance, with the final wicket falling to a sharp one-handed catch to Ian Neil.

After the game the Barrackers Cup was presented to C.C.N.S.W. and the players retired to the Officers Mess.

The Fielding was: – Stumpings: Nil

Catches: two catches to Alton van Straalen; one to each of J. Shipton (w), P. Hogan, P. Moorhouse, I. Neil, and T. Robertson. 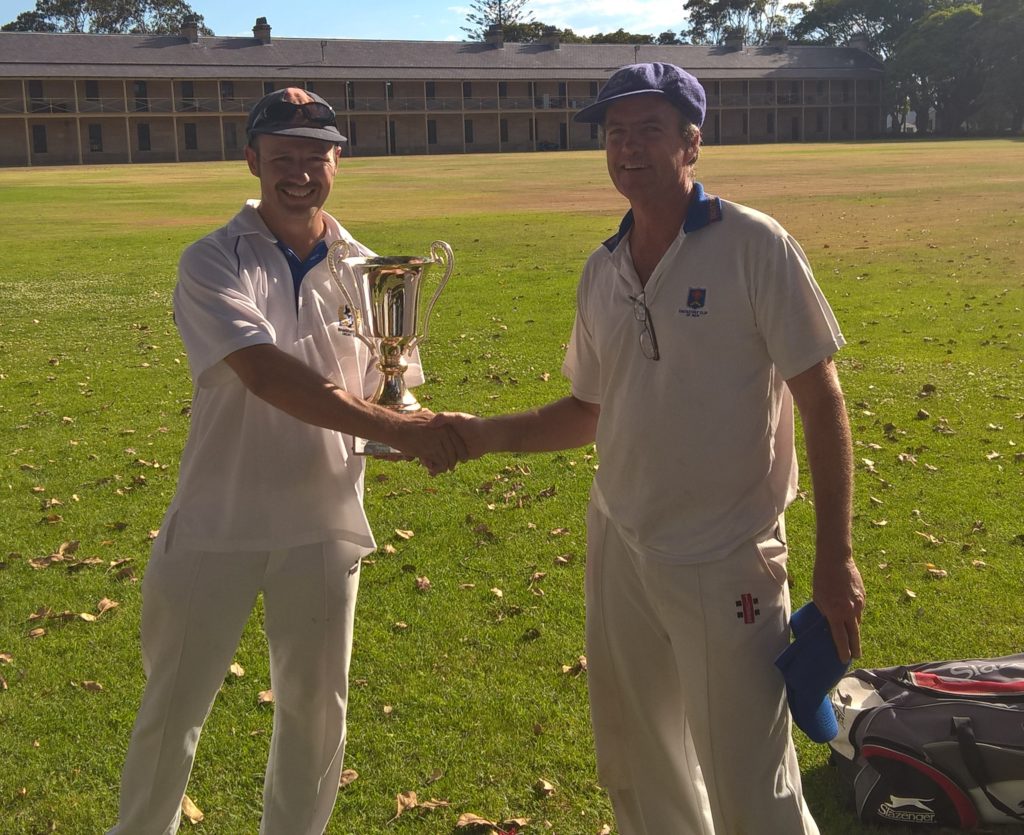