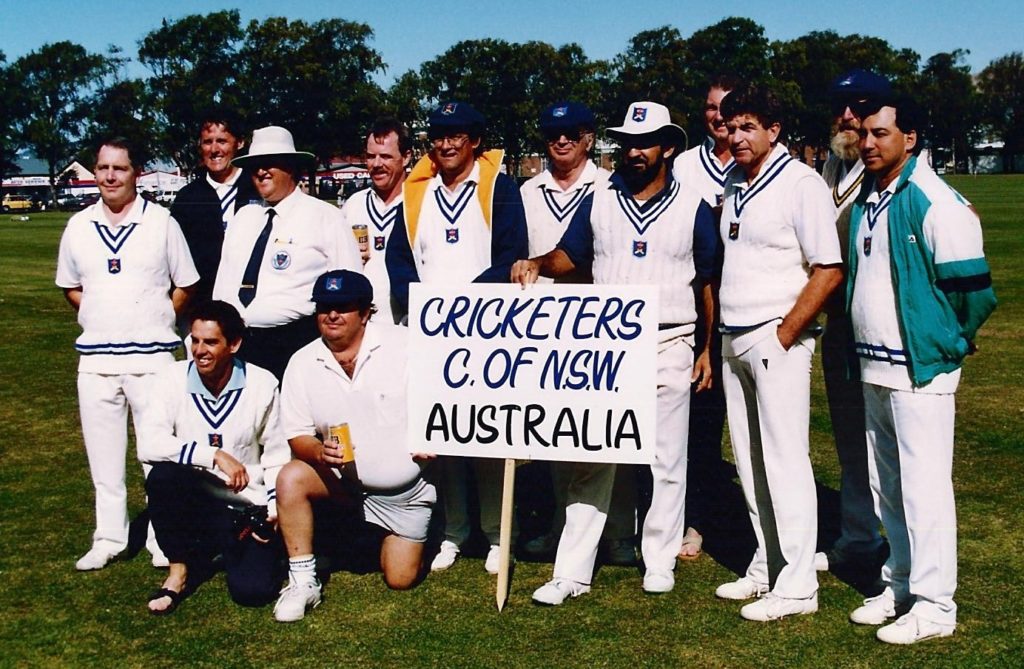 History – Part One (Based on an article by Jack Pollard)

The idea of forming a club for Sydney cricketers was first raised in 1894 when it was suggested that the New South Wales Cricket Association combine with the controlling bodies in cycling, swimming, rugby and athletics to form a sports club.  Nothing came of the notion but in 1896 the NSWCA set up a sub-committee to inquire into the possibility of acquiring clubrooms for the Association. This committee’s recommendation that the Association make an arrangement with the Commercial Travellers’ Club in Pitt Street to use their premises was rejected.

The Cricketers’ Club idea lapsed until 1927 when it was again discussed at a NSWCA meeting, but it was not until 1936 that the Association decided to build a club in its new building in George Street.

The prominent solicitor Sydney Webb, who had handled the purchase of the six-storey building in George Street for £54,803, drafted a constitution for the Cricketers’ Club in August 1938, and the club was registered as a company on 14 November, 1939, two months after the outbreak of World War II, and opened for business on 1 July 1940.

From the start the Cricketers’ Club membership strongly supported the development of cricket. Two cricket nets were set up on the roof of Cricket House for members to practice during lunch hours and these nets remained in operation until 1953.  Discussions among his fellow members made the Randwick batsman Jack Chegwyn aware of big possibilities for country tours by teams of leading players from the State’s representative sides. Chegwyn, who scored 375 runs at an average of 46.87 with one century in his five matches for NSW between 1940 and 1942, became a sporting legend for the pioneering work he did in the bush with teams selected at the Cricketers’ Club.

By 1942 the Cricketers’ Club had made such dramatic progress that most Sydney grade cricketers were members and at the end of that year the Club made a 1000 pound loan to the NSWCA to help the Association continue operating at a time when it had no income from Test or Sheffield Shield cricket.

Annual games at the SCG v the NSWCA commenced in 1965. In 1971, seven club members were in Don Bradman’s nomination for the best eleven Australian cricketers of the past 50 years. The Cricketers’ Club entered a side in the City & Suburban competition in 1971 and has continued to play regularly in that competition.

Under the presidency of Ron Holmes the Club introduced a rule automatically granting membership to Australian Test players. The England and Australian teams in the 1988 Bicentenary match in Sydney played for a trophy donated by the Cricketers’ Club.

Cricketers’ Club teams have been a dominating force in the Sydney City and Suburban competition for more than 40 years. The Club has hosted numerous touring teams from countries such as England, Canada, Malaysia, India, the West Indies, New Zealand and the USA. Overseas tours have become common.

With the liquidation of the registered club and the loss of its Barrack Street premises in 2001, the cricket and golf players retained the name and logo and continued to play, as a new incorporated association, still called “The Cricketers’ Club of New South Wales”, which was registered on 14 July 2003.

Editor’s note: Jack Pollard (1926-2002) was the author of over 80 sports related books, and numerous outstanding cricket books including an authoritative five volume history of Australian cricket. He also wrote the most popular of all Australian cricket encyclopaedias, entitled “The Game and The Players”.

The Sri Lanka Tour over Easter 2019 was the Club’s 35th overseas tour in the past thirty three years (plus five other domestic tours to Norfolk Island, Lord Howe Island, Tasmania, Cairns, Perth and Darwin):

The Club’s proposed tour to Corfu-Croatia and Slovenia planned for September 2020 has been postponed rill 2023 because of Covid 19.

The Cricketers’ Club currently has approximately 120 members, including about 100 active cricketers. The Club also has a golf section. Of those 100 cricketers, approximately 30 play for the Club on Saturdays, and another 70 on Sundays and in mid-week games.

In the City and Suburban competition on Saturday and some Sunday afternoons, the Club plays about 16 matches a season. These are usually 35 overs a side, although by agreement, they are sometimes extended to 40 overs. The C&S “competition” does not have a formal league table and not all clubs in the competition play each other. Nevertheless cricket is played in a competitive manner, and at its best, would probably equate to the standard of Sydney 3rd-4th Grade Cricket, although considerably shortened. In recent seasons, the Club has lost few C&S games. In addition there is a two part Jack Pace Cup competition; part 1 is a league structure for points before Christmas; the top eight teams go into a knock out stage after New Year; C.C.N.S.W. has won the Cup four times.

On Sundays, the Club plays eleven fixtures in a competitive over 40s “Masters” league, in which the Club’s position has varied from league winners to bottom. These are 40 over a side games. Six bowlers must be used, and batsmen must retire on scoring 40 runs. The Club also plays an eleven round over 50s “Classics” competition with similar rules and in 2016 won the Premiership.

Outside leagues, the Club also plays about 12 other competitive but “friendly” fixtures each year, on grounds which have varied from major national grounds such as the MCG, SCG, the Gabba, Telstra (Olympic) Stadium and Bradman Oval, Bowral, to small country grounds such as Mandalong, and Mudgee. Opposition includes teams such as the Bradman Foundation, the Melbourne Cricket Club, Molonglo (Canberra), the Primary Club, the Queensland Cricketers’ Club, the Sydney Cricket Club, and usually one or two overseas touring sides. These are generally full day games of about 45-50 overs a side.

In February 2004, the Club was invited by the S.C.G. Trust and Cricket NSW to represent the Civilian population of the State in a match against the Military to celebrate 150 years of cricket at the S.C.G. A special plaque to commemorate this is permanently displayed on the exterior wall of the home dressing room at the SCG and the ball used in the match is on display in the Museum.

Since the 2018-19 season the Club has also entered a summer side in a  midweek evening  T20 Eight a side competition run by “The Last Man Stands” with 14 evening rounds on artificial wickets in Moore Park. The Club also plays in a Sunday morning winter LMS competition and was the undefeated Division 4 champions in winter 2022.

In the 2021-2022 season, the Club played 36 eleven-a-side fixtures and 12 LMS 8-a-side T20s, and used over 100 players. The Club is currently contactable c/o the Secretary, Adrian Hawkes at secretary@ccnsw.com